1. At the bottom  '[ ] Change the location of Temporary Internet Files' if checked will be automatically set. 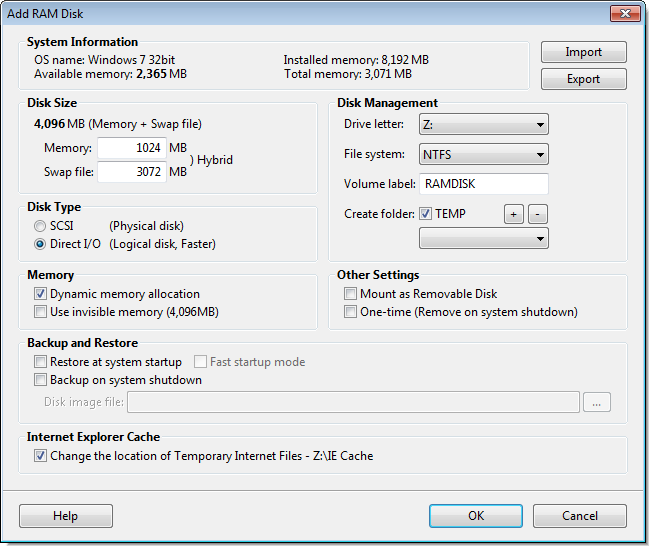 Set the size of the RAM Disk.

The swap file is specified as 0MB.

Memory size must be less than or equal to 90% of free memory.

About 200 ~ 300MB of memory, at least want with good space to leave. (System Information free memory reference)
Hybrid: a combination of memory + swap file memory, the hard disk file.
Lack of memory, using the first hybrid only the C: drive, create a temporary swap file on the root.
At the end of the temporary file to the system swap file is deleted, and the OS virtual memory (paging file) and not related.
Utilizes a hybrid of the RAM Disk, the problem of lack of capacity can be prevented.
Faster than the speed of the memory, but it's the best.

SCSI: Physical Disk-to-Disk Administrator to recognize real hard to get caught in any application compatibility is good.
Direct I / O: Logical Disk-to-Disk Manager, etc., but some applications may not be aware, the faster the speed.
Prefer not select the next depending on the intended use.
When using the speed up of web surfing Direct I / O is recommended.

Dynamic memory allocation: Allocates memory in sequential order. The delay at the time of the allocation.

The computer is turned off, all data in memory will be deleted.
At the end of the backup data to the RAM disk and start Windows restore that function.
Restore at system startup : Windows startup disk image files on the hard disk from which they were backed up data to restore.
Fast startup mode : If necessary, restore the data from time to time. There is no delay when Windows startup.
Backup on system shutdown : Windows at the end of data to the hard disk is backed up to a disk image file. (Save only the changes)

Disk image file : Backup and restore hard disk files to be used. (Recommended to drive the Windows is installed.)

Mount as Removable Disk : Windows to create the Recycled or System Volume Information folders on the disk.

One-time : RAM Disk will be removed at Windows shutdown. (Used when no trace data usage)

Setting the disk descriptor file (*.uds) export can be.
Import the uds file, you can quickly set up.

If you are using a drive letter on import can be excluded.
List